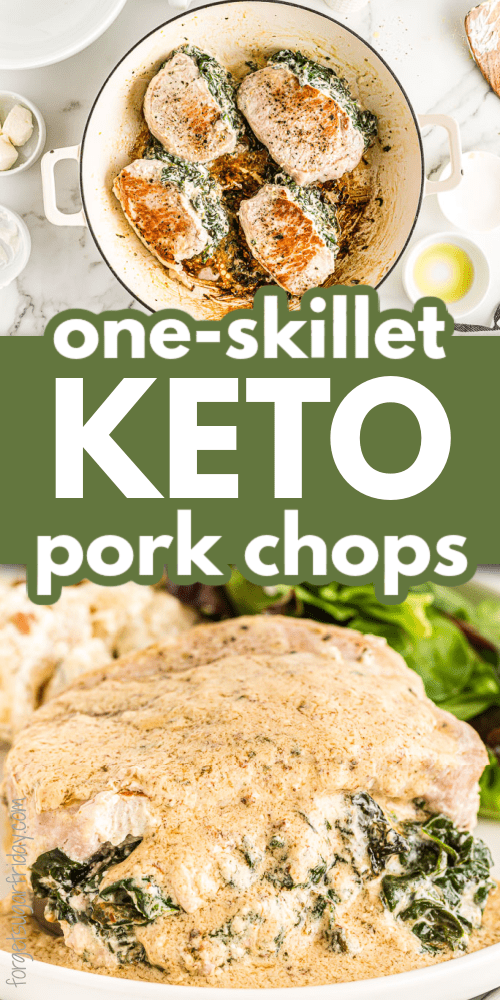 These creamy stuffed Keto Pork Chops are the delicious pork chops you need in your life. An easy one-skillet recipe! 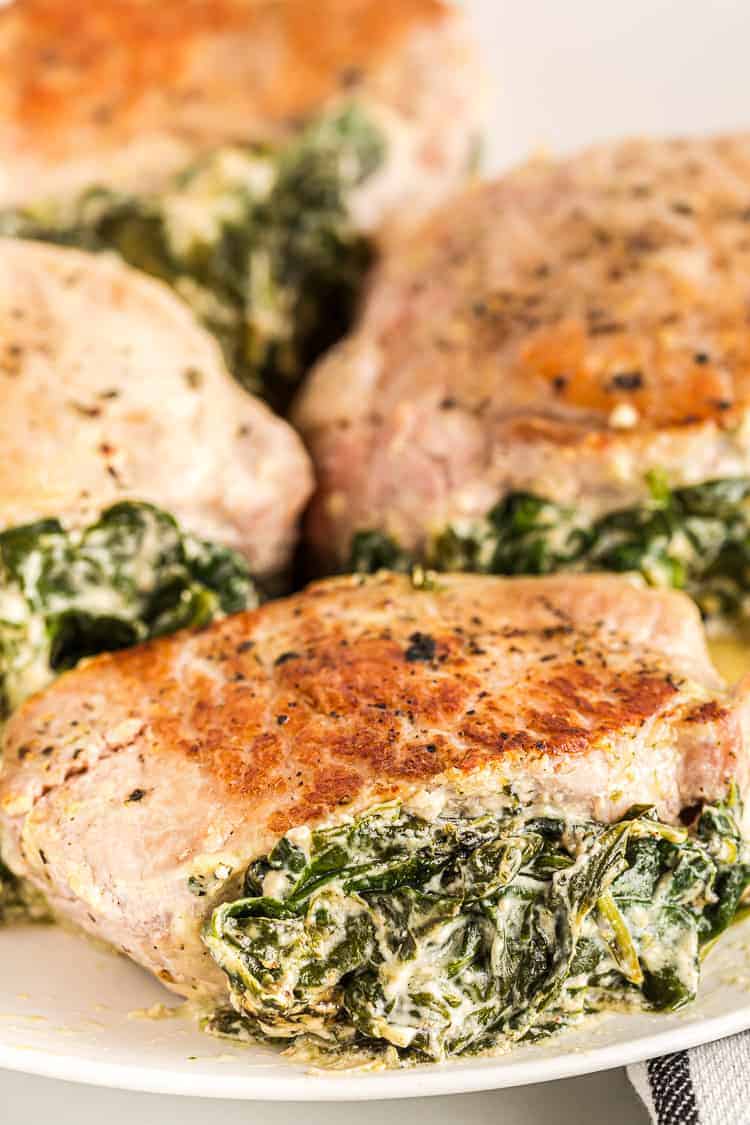 In the keto recipe world, pork rinds get a lot of attention, but pork chops? Not so much. This recipe aims to change that! When you dig into these creamy spinach-stuffed Keto Pork Chops made in one skillet, you’ll see why they’re worth the (minimal!) effort.

Can You Eat Pork Chops on the Keto Diet?

Yes, you can eat pork chops on the keto diet. The keto diet includes heavy fat meats that can be cooked in a variety of ways. Pork chops can be fried and cooked in a skillet, an air fryer, oven and grill. Adding pork chops to your keto low carb diet provides more options for your keto dinner recipes list.

Ingredient quantities for these homemade pork chops are located in the recipe card at the end of the post.

This is just a quick overview of some of the steps involved in making the low carb stuffed pork chops. For the recipe in detail, including exact measurements used at each step, scroll to the recipe card at the end of the post. 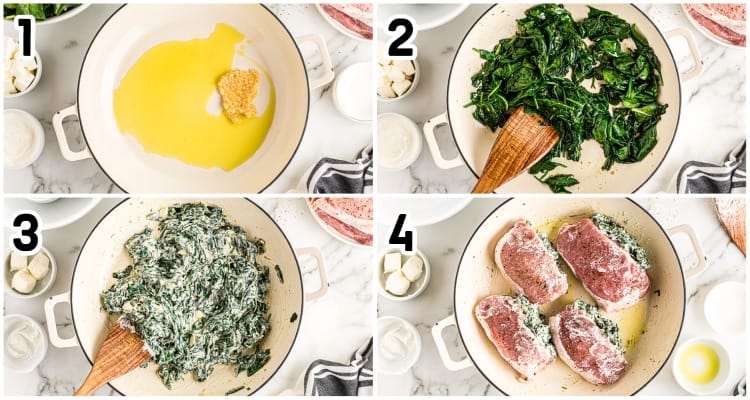 Prepare your pork chops by cutting them along the side to form a pocket. Make sure you don’t cut them all the way through! Season with salt and pepper and set aside.

Heat 1 tbsp olive oil and brown the garlic in a skillet. (Photo 1)

Add spinach to the skillet. Working in batches if needed, wilt the spinach. (Photo 2)

Add 3 oz cream cheese and all of the sour cream to the spinach, stirring until the cream cheese has melted and the spinach is fully coated. Season with salt and pepper and remove from heat. (Photo 3)

Stuff each pork chop with spinach mixture. Add remaining 1 tbsp olive oil to the skillet, then place the pork chops in the skillet. (Photo 4) 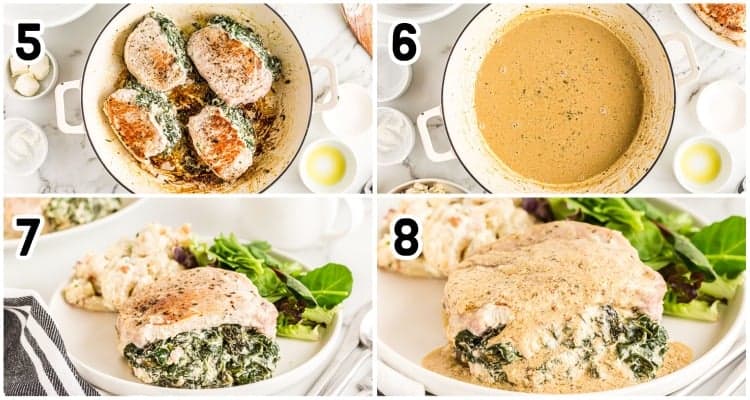 Cook pork chops on each side for 3-5 minutes until pork is browned and cooked through (at least 145 F as measured by a meat thermometer). (Photo 5)

Remove pork chops from the skillet and transfer them to a serving dish. Cover with foil to retain the heat. Add chicken broth and remaining cream cheese to the skillet. Scrape up brown bits from the bottom of the pan and cook until a creamy sauce is formed. (Photo 6)

Divide sauce evenly and pour over each pork chop to serve. (Photo 8) 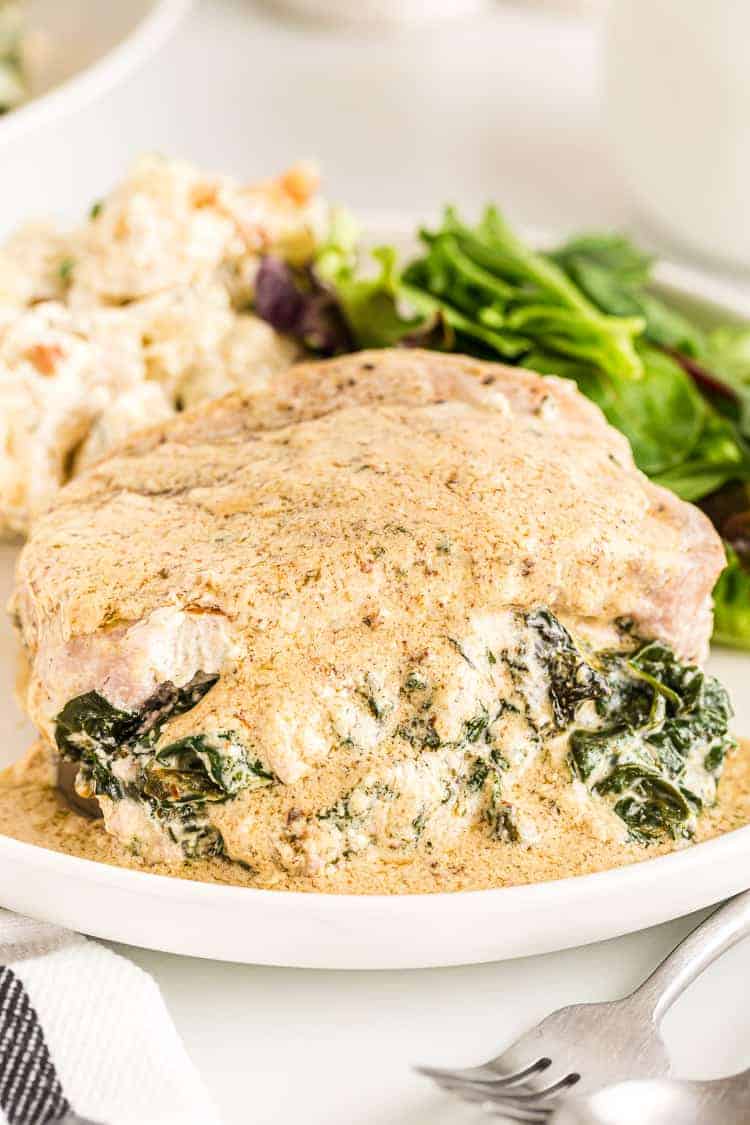 What to Serve With Keto Pork Chops

I hope you love this easy low carb pork chops recipe! If you liked this post, I would so appreciate you giving it a share by using the social sharing icons. THANK YOU! 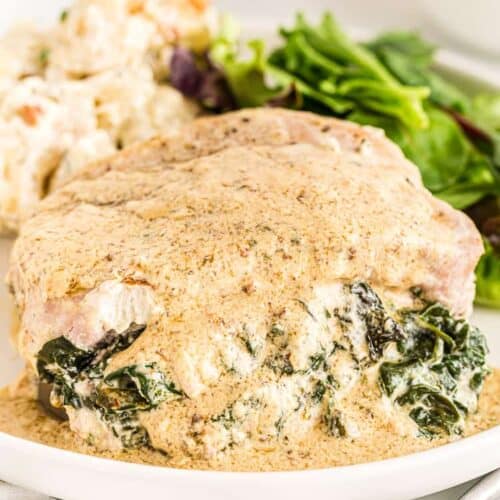 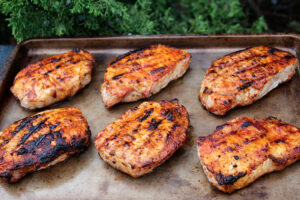 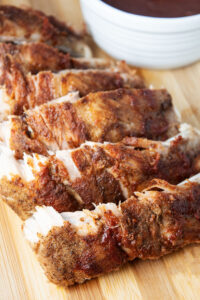 Nutrition facts are included as a courtesy only. They are accurate to the best of our knowledge based on the ingredients and brands used, but their accuracy is not guaranteed. If applicable, sugar alcohols have already been removed from the total carb count.
Tagsketo dinner recipes keto pork chops

7 Keto Work Lunches That You Can Reheat in the Microwave!

Keto Bone Broth: 5 Reasons Why You Should Drink Bone Broth on the Keto Diet