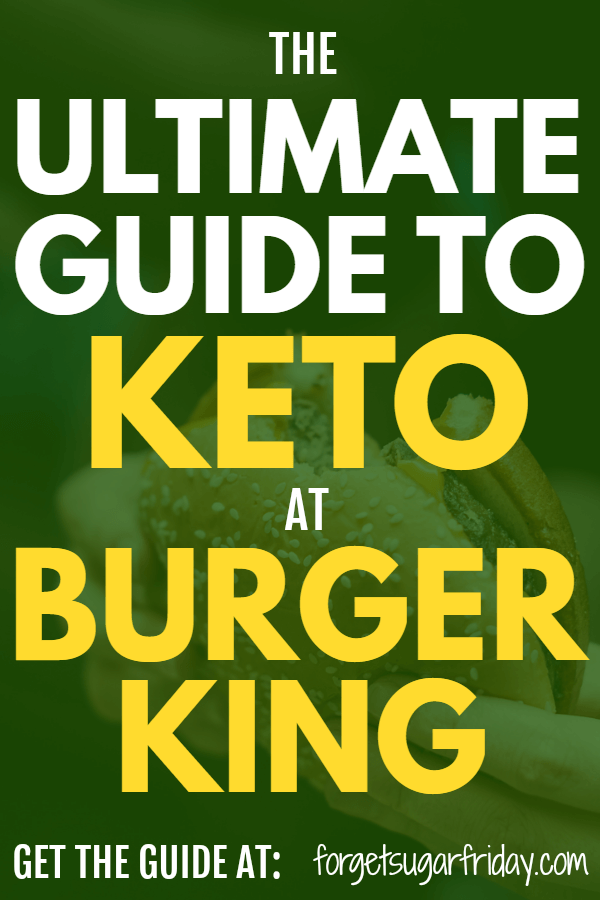 Have you been wondering, “Can I eat keto at Burger King?” The answer is yes! Find out exactly what to order from the “Home of the Whopper” with this comprehensive Ultimate Keto at Burger King Guide. 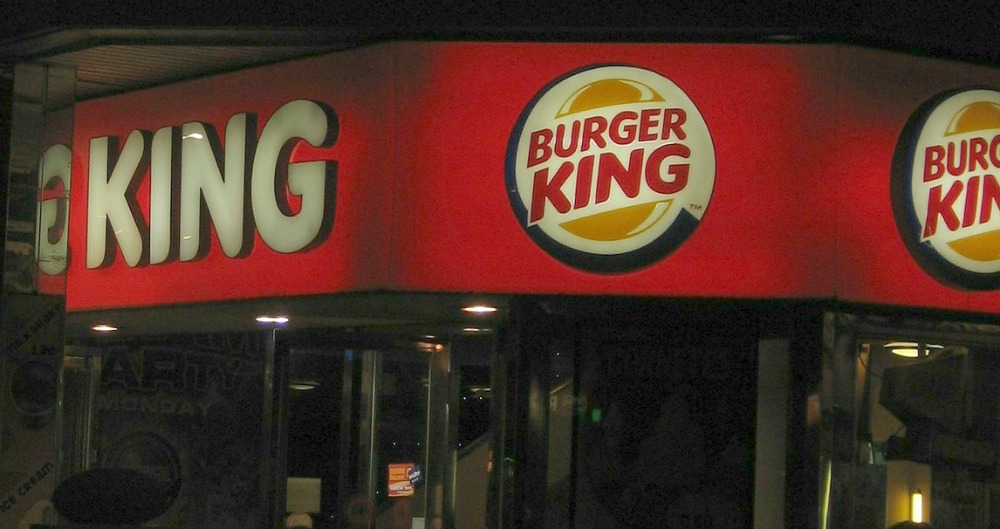 Burger King is the fifth-largest fast food chain worldwide and home of, of course, The Whopper! Unfortunately, a full Whopper will set you back a whopping (pun totally intended) 49g net carbs. Definitely not keto friendly…. but fear not! You can actually get TONS of keto friendly food at Burger King.

In fact, it’s actually shocking how keto-friendly Burger King is! With the simple removal of the bread (whether it’s a burger bun, biscuit, or croissant) and sometimes a sauce, you can totally live it up at Burger King! Or maybe that should be Keto King…… 😉

If you follow a few guidelines I’m going to show you, you can get some amazing keto Burger King meals! There are so many choices that you could practically eat at Burger King daily and never get bored.

Please BOOKMARK this post right now because I am going to update and improve it as much as possible. I want it to be so comprehensive that you wouldn’t think of going anywhere else!

…and how I sourced the nutrition info.

Note that this info was correct to the best of my ability at the time of publishing this post. I sourced my information from the Burger King Nutrition Guide, but I am only human (darn!), so if you see an error, please let me know by commenting on this post and I’ll correct it. Thank you! 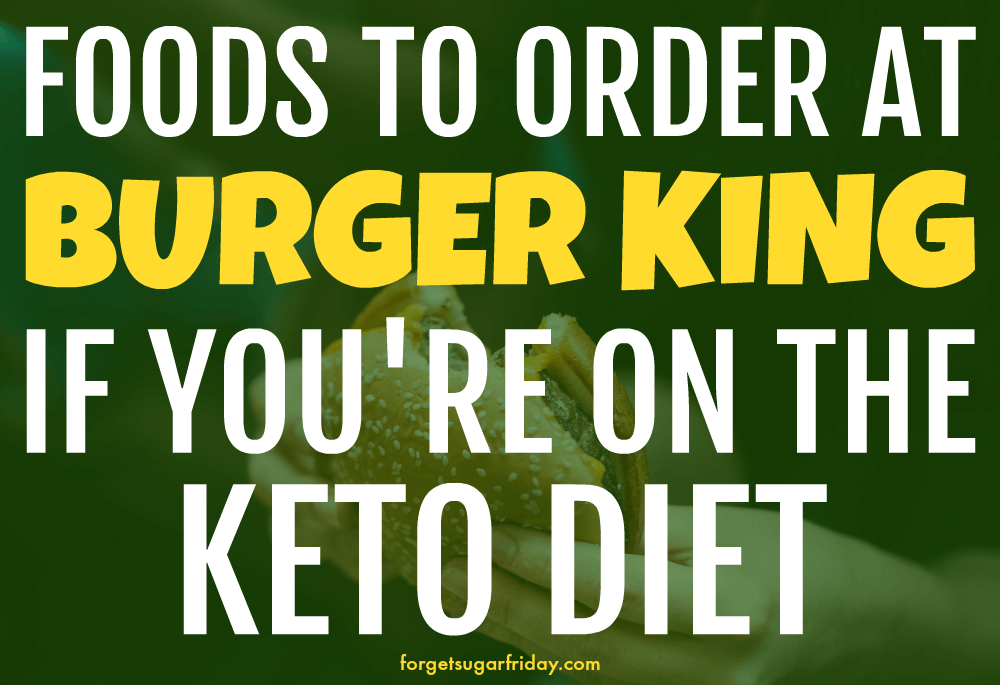 Keto Burger King – What can I eat?

Want keto Burger King breakfast options? You’re in luck… you have plenty to choose from!

The standard BK Ultimate Breakfast Platter at Burger King comes with hash browns, a buttermilk biscuit, eggs, pancakes, syrup, and a sausage patty, totaling 117g net carbs (ouch!). However, some Burger King locations will let you customize the meal — sometimes at an extra cost and sometimes for the same price (this is dependent upon location/franchisee).

The items below are from other breakfast menu options, but some locations may let you substitute them into the Ultimate BK Breakfast Platter, or even order them separately. (Just ask!)

These Burger King keto breakfast options are great because you can just order the food as-is and remove the bread.

Want Burger King keto lunch and dinner options? You have tons to choose from!

Feel free to add the tomatoes and onions back to some of these; it will increase the carb count slightly, but will give you some veggies! Or, you can combine one of these with the Garden Side Salad.

Keto fat bombs are low in carbs, can be sweet or savory, and delivers a “bomb” of fat. Here are a few easy Burger King keto fat bomb options: 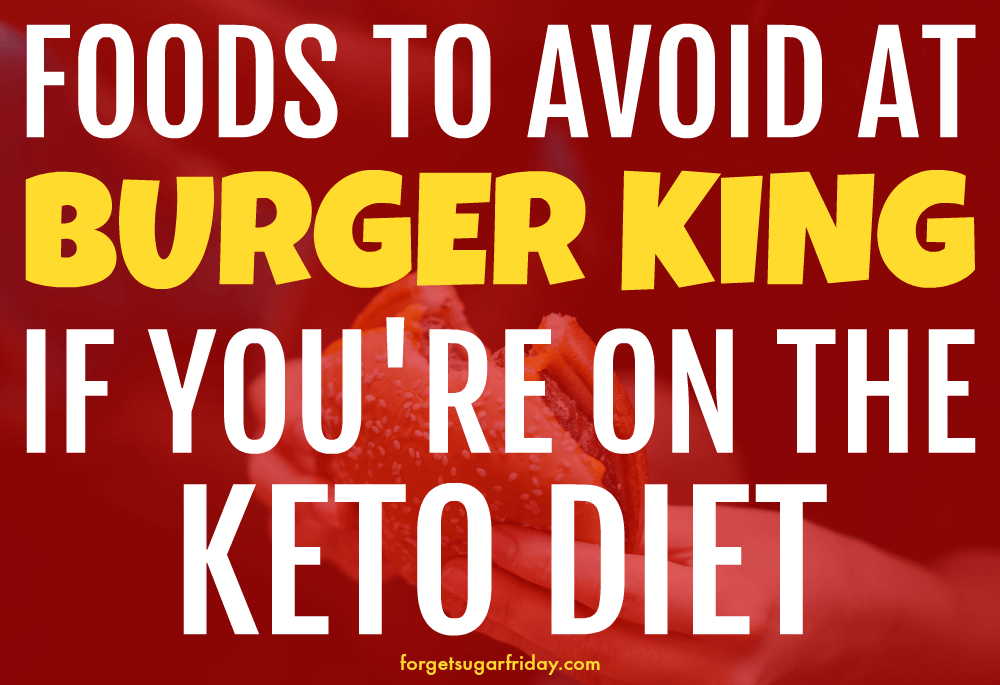 Unfortunately, there are plenty of foods at Burger King that just won’t work for the keto diet. While there are many more foods than listed below that are not keto friendly, for your convenience, here are just some of the high-carb foods you will want to AVOID at Burger King if you are on the keto diet:

What has the least carbs at Burger King?

Here are some of the Burger King foods with the least amount of carbs:

Where can I get Burger King nutrition facts?

Help Me Make this the BEST Keto Burger King Guide!

I’ve given you plenty of info, but I want to know about your experiences with sticking to the keto diet while eating at Burger King.

I hope you enjoyed The Ultimate Keto Burger King Guide! If you did, please give this post a share on social media by using the social sharing icons. Thanks so much!

Win a $50 ChocZero Gift Card! (Plus a ChocZero coupon code!)