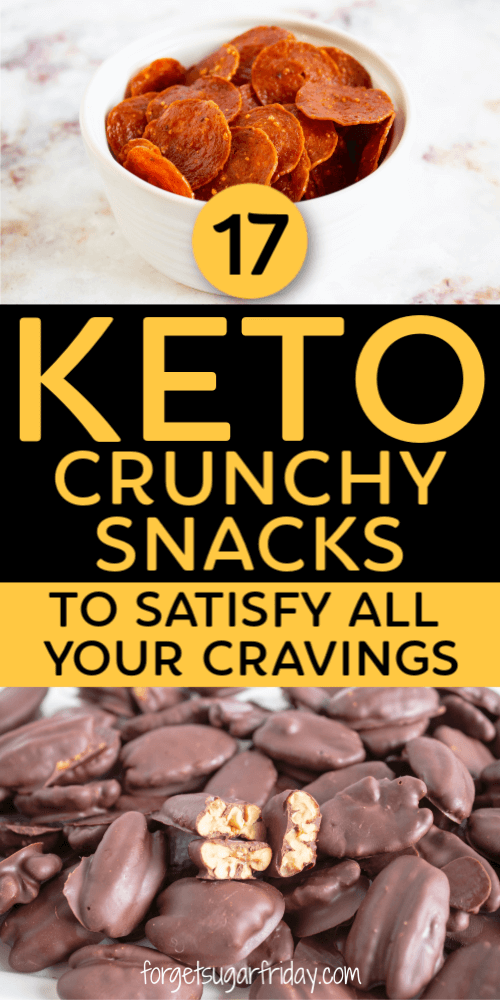 Craving crunchy snacks on keto? I’ve got you covered with this roundup of 17 amazingly crunchy keto snacks that actually taste good! From macadamia nuts to pizza chips to chocolate granola, you’ll definitely find a snack to satisfy your crunch craving here. 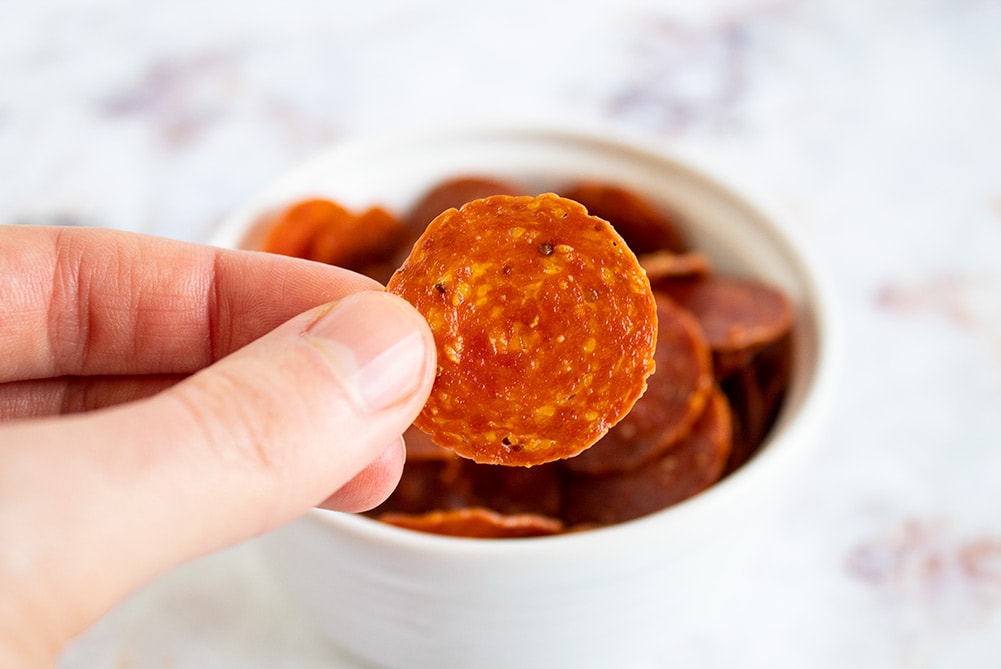 This post contains affiliate links, which means I’ll make a small commission if you purchase through one of my links.

Who doesn’t love a good crunchy snack?! I know I do, and I know many of you do too. In fact, most of the emails I receive from readers can be placed in two basic buckets: “I miss sugary foods” (I’ve got ya covered here) and “I miss crunchy foods” (I’m about to fix that with this post).

I won’t waste a lot of time blathering on… I know you want to get to the snacks! I’ve divided this post into “no recipe needed” snacks and “recipe needed” snacks. Even when a recipe is needed, I’ve made sure to include EASY recipes. There is nothing complicated here!

Lakanto recently released Keto Cinnamon Almond Crunch Granola with only 4g net carbs per generous 1 cup serving, and let me tell you… this stuff might be the best keto food I’ve ever tasted. I can’t even believe that it’s sugar-free, let alone keto! It reminds me of a Cinnamon Toast Crunch-flavored granola and it’s better than any sugary granola I’ve ever eaten. Use coupon code FORGETSUGARFRIDAY for 15% off your order! 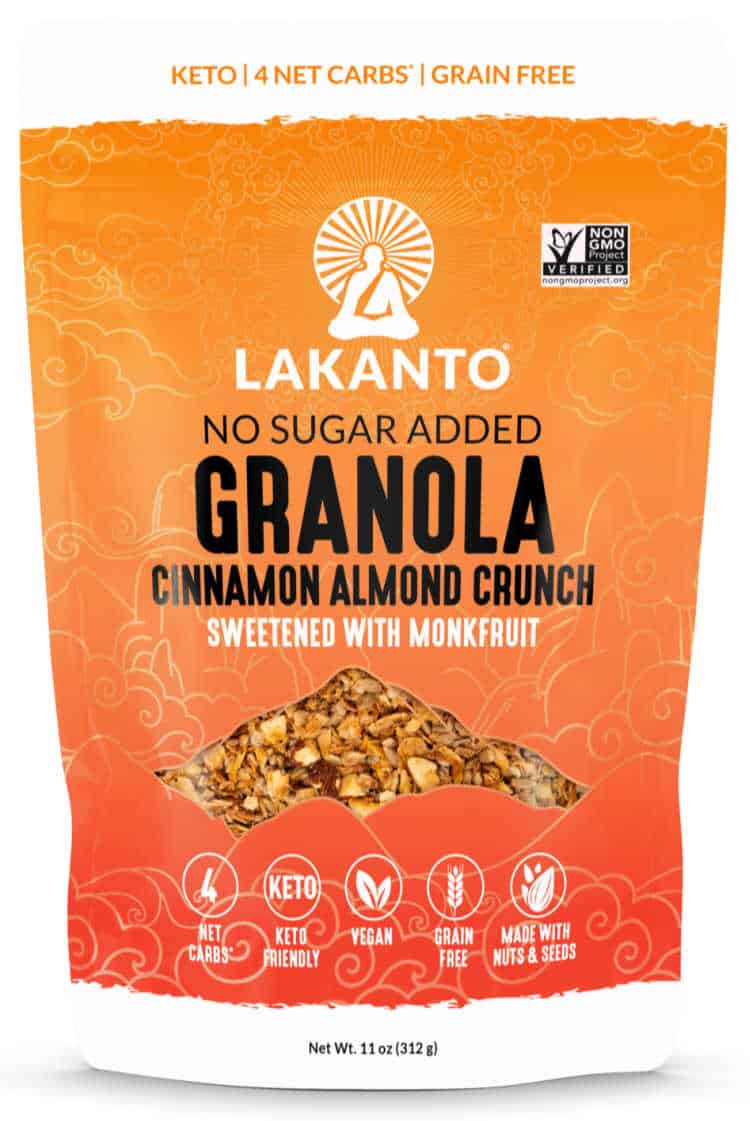 Pork rinds are the classic go-to crunchy keto snack! They may not be a food you naturally gravitate toward when you’re not on keto, but when you’re on keto, they’re kind of irresistible. They’re even better when dipped in mayo, ranch dressing, or another keto-friendly dip. I tend to buy the economical Utz brand in the large 18 oz. tubs. Artisanal brands like Epic are absolutely fabulous, but they’re so pricey that I consider them an occasional treat.

Much like pork rinds, I think celery is kind of take-it-or-leave-it off keto, but on keto, it is a crunchy and slightly salty snack that you may find yourself actually craving! It’s good plain for the crunch factor, or you can fill it with some nut butter. For a serious double crunch, fill it with unsweetened crunchy almond butter.

Dill pickles are also a source of a fun-and-salty keto crunch. I had been purchasing dill pickle spears, but a reader recently turned me on to baby dill pickles. They’re great too! I highly recommend the 365 (Whole Foods) brand or Vlasic “Purely Pickles” line for the best ingredient profile (no iffy ingredients like Polysorbate 80 and Yellow 5). 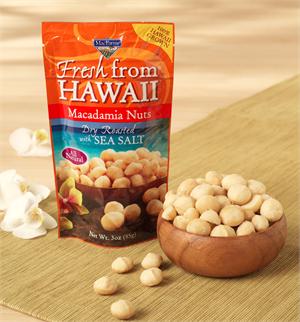 Macadamia nuts aren’t the cheapest nuts out there, but they are SUPER crunchy if you get the right brand, like MacFarms. Plus, they’re extremely low in carbs (only 1g net carbs per serving). If you want to crunch away on nuts without taking in a bunch of carbs, macadamia nuts are the way to go! (Almonds, by contrast, have 3g net carbs per serving.)

I feel like radishes are one of keto’s best-kept vegetable secrets. One cup of sliced radishes contains only 2g net carbs, and they are so versatile! When served raw, they are peppery and oh-so-crunchy. (I like to slice them as in the photo above or halve them.) You can also roast them and make radish chips.

If you want a grab-and-go cheese crisp (rather than making some from a recipe), these HighKey Cheese and Egg White Protein Crisps fit the bill. The added egg white (clever!) lends a protein boost and extra crunch. You can choose from four different flavors or buy the variety pack. I like all of them, but I am partial to the bacon flavor.

This recipe couldn’t be easier and it is SO good. Keto Pepperoni Chips make for the perfect satisfying and crunchy snack — kind of like the keto version of Pringles.

These pizza chips have all the flavors of pizza, but in a bite-sized chip. They’re like the “next level” of pepperoni chips: pepperoni baked on a bed of oregano-spiced parmesan cheese.

These butter-toasted, chocolate-covered pecans are most definitely crunchy and very chocolatey. If you want to skip the chocolate, you can just follow the toasting step for slightly sweet, buttery, and crunchy pecans.

Keep things simple, crunchy, and delicious with these oven-baked parmesan chips that contain only one ingredient!

A crunchy snack roundup would not be complete without crackers. In this case, Almond Sesame Crackers! Almond flour crackers are a wonderful keto snack, and this version makes things extra-crunchy with the addition of sesame seeds.

Yes, you can thinly slice zucchini and bake it to make crunchy, tasty, and oh-so-healthy zucchini chips! (Vegetables are so much easier to eat when they’re in chip form, don’t you think?!)

#15: Air Fryer Bacon by Recipes from a Pantry

You haven’t had crispy bacon until you’ve had air fryer bacon! An air fryer will give you THE crispiest bacon ever that is perfect for a snack or served with breakfast.

#16: Nacho Cheese Crisps from Beauty and the Foodie

Who can resist the lure of Nacho Cheese Crisps? These crisp, chip-like snacks are a yummy, keto-friendly chip alternative that only takes about 8 minutes to bake and are perfect for dipping in salsa or guacamole.

Last but certainly not least is this Crunchy Munch snack mix that is filled with a variety of nuts plus cinnamon, Swerve, and Lily’s chocolate chips. Yum!

Is Popcorn Acceptable as One of My Crunchy Keto Snacks?

1 cup of air-popped popcorn contains 5g net carbs. It’s unlikely to kick you out of ketosis, but 1 cup isn’t a lot. It’s up to you!

What are Your Favorite Crunchy Keto Snacks?

After you read this post, let me know in the comments your favorite crunchy keto snack! 🙂

I hope you love this keto crunchy snack roundup! If you liked this post, I would so appreciate you giving it a share by using the social sharing icons. THANK YOU!